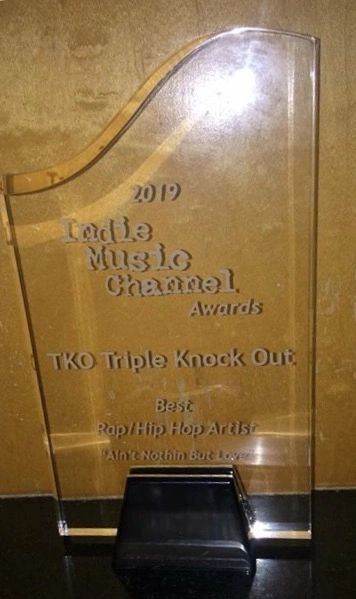 Get To Know 3KO

With the grit of David Banner, the crunk of Lil’ Jon and the swagger of LL Cool J, T.K.O. - Tripple Knockout-is a pound-for-pound champ ready to jump into the ring. Born Tracy Rucker in Bartow, Florida and a child of a hardened military family, T.K.O. spent his youth in tow traveling the world while furtively tuning an ear to music. By the age of 19, he had lived in more than fifteen states, from the southeast to New York, and spent his most memorable time outside the states in Germany where his father was stationed on two separate assignments. “Living in Germany was one of the greatest experiences of my life. I got an appreciation for the culture; the people were kind and welcomed somebody like me – someone who was completely different.” This nomadic lifestyle didn’t afford T.K.O. any level of comfort or contentment in his surroundings; a factor of his youth responsible for his lifelong, adrenaline addiction (his drug of choice) and risk-taking drive. What it did allow him was to establish residency in music making. He spent his every waking minute rapping and beating on anything in his path to tap into his passion for drumming which (much like Pharrell) led T.K.O. to become a percussionist in a variety of school music programs. Drumline along with legends such as AI Green and The Supremes (the icons of his parents liking), and transitional living fostered T.K.O.'s strong sense of respect for others and the desire to serve and protect those close to him. “Being part of all those bands-Concert, Marching, Jazz, Rock-taught me that being part of something is more than just showing up. You have to respect each other and work as a team. It really opened up a loyal, protective side of me.” While music fueled his mind and stoked his creativity, T.K.O. stiff ached for a more physical outlet to annihilate his feelings of being a man of a different breed. In a guy's outing and an unexpected occasion, T.K.O. ventured out alongside his cousin to a local sparring match. A fired-Up T.K.O. climbed into the ring and found himself a home. Time, practice, and the brawn of rock classics (by the likes Led Zeppelin, Pink Floyd and The Grateful Dead) playing in the shadows shaped T.K.O. to be one of the “beasty-est” in his field. Rather than use his animalistic, badass persona to elevate his own stature, T.K.O. selflessly applied his energy and skiffs to become a mentor to today's youth by joining forces with Atlanta's Gateway Center-an organization aimed toward ending homelessness -as an Outdoor Therapy Wildlife Counselor. Teaching the enrollees priceless lessons in self-defense, self-respect, and personal conduct T.K.O. encouraged the many children participants to become responsible, well-rounded young adults during his two-year tenure.

Lets Talk About It

T.K.O.'s resume and work experience as a boxer and mentor is weighted with time spent as a bodyguard and bouncer. As the “muscle”, his brute-like build proved to be his greatest weapon and shield as the 6’3”, 220lb wall-like man came face-to-face with life and death ducking punches and dodging bullets. While some may have bowed out, T.K.O. mustered his energies to turn the experience to good, walk tall and stand with a fist. In 2000, seizing every ounce of his being and street-smarts, T.K.O. made the decision to shift gears and set his sights toward a music career. Combining the physicality of boxing and the intuitiveness gained as a bodyguard with his love of rhythm and rhymes, and his desire to be a positive influence, T.K.O. speaks his voice with his music. Although the transition may not seem the most obvious, he believes the career change was a natural progression. “The similarities between what I’ve done and what I’m doing are sick. Boxing and rapping are both a fight: your beginning has to be tight or else you’ll unravel before you ever get to the end. Both are aggressive, action-packed, and interactive. So, you got to be light on your feet when you do what you do. Be ready to move, and in either case, when it comes down to it, words are a greater weapon (than fists)--in a fight and in song.” Currently living in Atlanta, Georgia, T.K.O. is ready to go another round… and he's not at all concerned about being new to the game. “Stereotypes don’t define you. You got to step outside those lines and be the person you know you can be. Just because you’re from a bad neighborhood doesn't mean you have to sell drugs or be a thug. You have to push to shed that image. I’ve waited ‘til the right time to come out the box, and I’m here. Being a rapper doesn’t make me a bad guy and I aim to change the image. I’m really just a big teddy bear, but a bear that you do not want to mess with.” Just as the music of hip-hop greats Tupac and Biggie did for him, T.K.O. aspires to make his music come to life for his fans by writing genuine lyrics that mirror everyday life, everyday thoughts, and capture just about everyone’s feelings. “I want people to see something of themselves in my music. If they can own a piece of what I’m saying, that connection will be there.” A champion in athletics, the arts, and human behavior, T.K.O. dedicates his physical and artistic field of energy to the creation of a better world. In spite of his imposing frame and intimidating presence, his formidable strength makes it undeniably clear… there is beauty in the beast.

Thanks For Riding With Me

Check out my music video

Where Dem Girls At. TKO (In Studio Performance)

I uncovered my passion for music during my first guitar lesson with my dad. From that point on, I was involved in choir, musicals, and song writing.

I followed my dream to California and graduated from college with a degree in music production. I write my lyrics and produce my songs in my home studio.

I find inspiration all around me.  I try to make my music representative of myself and my generation. I love the places that most people don't give a second glance.

Sign up to hear upcoming shows, albums, and events.